Drive unit
The heart of the Reference Anniversary turntable is its motor drive system. For some time, it has been recognized that multi-motor drive systems enhance the speed stability of a turntable’s rotating platter. The Reference Anniversary turntable employs dual high precision, Swiss made, decoupled, brushless DC motors. This arrangement optimizes both torque and speed accuracy. This massive motor drive system weighs 11.2 kg/24.6 lb. Expect additional details once the patent process is underway. In addition to the innovative two motor system, the turntable features a well thought out technology for absolute speed calibration. An accelerometer monitors the floating chassis to ensure that it is absolutely stable otherwise calibration does not take place. Calibration is done over a 20 second window during which time the platter’s speed is precisely calibrated during actual playback (stylus in groove). During this 20 second cycle the platter’s speed is compared with a high precision quartz reference. Any deviation from this absolute speed reference is corrected accordingly. An easy to read, distinctly Nagra Modulometer on the turntable’s front control panel makes calibration (and pitch control) simple. During listening no active speed control is employed. While listening, the motors are only running in a closed loop mode. By eliminating active speed control the “cogging” and associated ill effects on image stability generated by such active systems is avoided. Attention to detail even extended to the belt used in the motor drive. For this essential part we took inspiration from the iconic Nagra IV-S tape machine. Because the original supplier of these belts is no longer in existence, we undertook a chemical analysis of the belt composition and have faithfully reproduced this high performance part. We have decided to pay tribute to Nagra’s analog recorder legacy by calling Nagra’s LP drive “Nagra IV – LXX caliber”. Aerospace material platter
Another critical component is the turntable platter itself. It is this component which intervenes as the interface between the LP and the motor drive. In this case, we exhaustively researched material science. This search led us to aeronautic/space alloys and specifically to a highly specialized, very high density (60% more dense than titanium), non-ferrous alloy with extreme damping properties. This alloy is called EXIUM® AM. It was developed by a French company after a special request of the CNES (equivalent to NASA in France) and in collaboration with the famous Ecole des Mines de Paris. To produce usable material, the alloy, in molten form, must be spun in a centrifugal casting machine.
From this stage it is precision CNC machined into the exacting specifications of the Reference Anniversary turntable’s 6.5 kg/14.3 lb. platter. The end result is a platter that is extremely inert and the first ever audio component to be produced using this Exium® AM alloy. While sonics clearly rule the day in any Nagra product, where there are opportunities to address aesthetics without compromising sonics, we do so. The Reference Anniversary turntable’s platter’s absence of resonance presented such an opportunity.
Inspired by timepieces from the Swiss high end watch industry, we were able to incorporate an antistatic, 22 mm/.87 in. thick, transparent methacrylate surface to the platter. As in a “skeleton” watch case, this allows the marvel of engineering that is the Reference Anniversary turntable’s motor drive system to be visible. Also, as in the inspiration watches, the words “Swiss Made” are engraved on the caliber. Likewise, parts of the drive mechanism appear in both “Côtes de Genève” or Damaskeening and “soleillage” finishes. Additional engraving includes a reference diagram of the drive system’s belt path, importantly acknowledging our founder, Stefan Kudelski’s, genius, as well as Swiss horologic expertise. Beneath the platter is a sub-platter and shaft/bearing system whose most notable features include a subplatter machined from high strength aluminium. A phenolic interlayer is applied atop the sub-platter for resonance decoupling. The transition from sub-platter to the shaft/bearing system is accomplished via a machined brass adapter which is re-machined in mounted form for tightest tolerances. The shaft/bearing housing is machined from spheroidal graphite iron. The ultra precision shaft is fabricated from induction hardened steel which is subjected to a centuries old watchmaker’s super finishing procedure. The shaft bushing is machined of sintered bronze and high temperature/pressure impregnated with oil for maintenance-free operation. The bearing is comprised of stacked carbide balls which have been subjected to the highest polish grade possible.
Non resonant chassis
The backbone of the Reference Anniversary turntable can be considered the chassis and sub-chassis. In this case, massive plates of aircraft grade aluminium and phenolic have been precisely CNC machined to form a low resonance, high rigidity, layered structure of aluminum/phenolic/aluminum preventing sound coloration from the system’s mechanical parts.

Floating suspension
Integral to the performance of any ambitious turntable system is its suspension. In this case, Nagra engineers devised a unique solution which outwardly mimics the suspension systems of both our HD PREAMP and HD DAC X. Internally, however, is found an ingenious system combining both mechanical and hydraulic principals. The substantial suspension pillars employ both a spring mechanism and a highly viscous fluid contained in a “diver/chamber” configuration which, when combined, provide suspension and displacement in three dimensions. This innovative system provides unparalleled resistance to both self-generated and room/airborne vibrations and resonances. To ensure stability of the floating suspension, the plane on which the suspension functions is as close as possible to the plane of the LP playing surface thus, the “form follows function” height of the suspension pillars. Proof of this concept and its implementation included testing with a high performance, deep bass capable loudspeaker played loudly within centimetres of the turntable as it played an LP. The result was absolutely no breakthrough of vibration or resonance transmission to the highly sensitive cartridge/tonearm interface. Lab measurements confirm a self-resonance of the suspended chassis of less than 3Hz thus guaranteeing freedom from coloration or feedback even at significant listening levels. Overall levelling of the Reference Anniversary turntable is easily accurately accomplished by rotating the massive threaded feet of the suspension pillars. Super-cap power supply and super-cap drive unit
The power supply of any state of the art contending turntable system is an extremely critical component. The Reference Anniversary turntable benefits from the massive development process of our state of the art, supercapacitor based, HD PREAMP and HD DAC X external power supplies. While it is almost universally recognised that battery power supplies are far superior to power supplies connected to AC mains, it is not practical to use battery power supplies for higher power consuming audio components. Where practical, however, supercapacitor based power supplies provide all of the advantages of battery based power supplies with the added advantage of accepting and delivering charges much faster and with higher current load and cycle stability than battery based power supplies. In the four year development process of the Reference Anniversary turntable, considerable attention was given to the design and engineering of an HD level, supercapacitor based, external power supply for the turntable system. In addition to the utilisation of supercapacitors in the external power supply, the motor drive system was designed to utilise multiple supercapacitors at the source of demand – the motor drive itself – thus realising the tremendous benefit of having the energy source right next to the demand. The Reference Anniversary turntable was designed as a system. This means that the turntable and its tonearm were designed to work from the “ground up” as a unified playback system. Careful consideration was given to the development of a tonearm with performance capabilities commensurate with the turntable itself.

Dual concentric carbon fiber tube
The Reference Anniversary turntable’s tonearm wand is a dual concentric carbon fiber including an intermediary layer of wood. The wood is used to form shape as well as to eliminate potential vibration. The result is an ultra rigid, extremely low resonance platform for both the cartridge connection and bearing mounting. The arm is a single 10.5” piece, meaning that there is no separate head shell (and concomitant deleterious joint). This eliminates the additional electrical and mechanical connections and resonance point that necessarily accompany a two part headshell/arm wand. The tonearm’s bearing is a simple, extremely precise, CNC machined, hardened steel cone captured in a resonance isolating, silicone damped, ultra high density polyethylene receiving cup. The tonearm’s traditional counterweight is supplemented by a low hung, saddle shaped weight providing stability while minimising the tonearm’s effective mass. Leonardo da Vinci is oft quoted as saying that simplicity is the ultimate sophistication. No truer proof of this axiom is demonstrated than by that fact that the Reference Anniversary turntable’s tonearm is comprised of only eight parts. But for the arm wand itself, all other components in the tonearm were designed by the Nagra team and manufactured and assembled in Switzerland in accordance with the highest standards of Swiss precision.

Watchmaker precision adjustment
Precise alignment of stylus geometry in an LP’s grooves is critical. A sophisticated magnetic antiskating mechanism was designed to achieve this goal. Unique in its design and execution, a patent will be pursued for this masterpiece of engineering.
Extensive listening tests of multiple geometries and materials led the Nagra design team to Crystal Cable and the development of a custom silver monocrystal for the tonearm’s internal wiring.
Vertical tracking angle of the cartridge is an extremely important alignment parameter. Users of the reference Anniversary turntable/tonearm will enjoy the ability to easily and repeatably adjust VTA “on the fly”. An oversized, high precision, rotary collar facilitates smooth, exactingly fine adjustments, as with a precision camera lens. This system permits up to 10 mm/.4 in. of vertical travel.
Cartridge azimuth adjustment is facilitated by a simple yet ingenious eccentric portion of the tonearm which, via an accompanying dial, permits precise adjustment of this critical parameter. The record weight included with the turntable was also the focus of intensive research and listening tests.
Numerous permutations of materials and shapes were studied before a final combination of material and shape were settled upon. The result is a compact but heavy copper weight in a distinct form factor. The Reference Anniversary turntable is an analog product governed by immutable laws of physics and mechanics, very much like Nagra legendary reel to reel recorders. As such, it is not subject to the rapidly progressing and ever-changing developments of the digital domain. This means that the Anniversary turntable will remain technologically relevant for generations. For many it will be a last turntable purchase and a product which is proudly passed down from generation to generation. Just like many Nagra III recorders from the 50’s, which are still in active use today, the Nagra Reference Anniversary turntable is a product for life.

Offered as a very limited edition of 70 units each of which includes “in home” set up and dial-in by Nagra factory specialists, invitation to Nagra factory for VIP tour and exclusive accessories.

We're not around right now. But you can send us an email and we'll get back to you, asap. 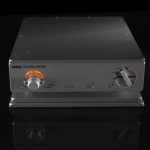